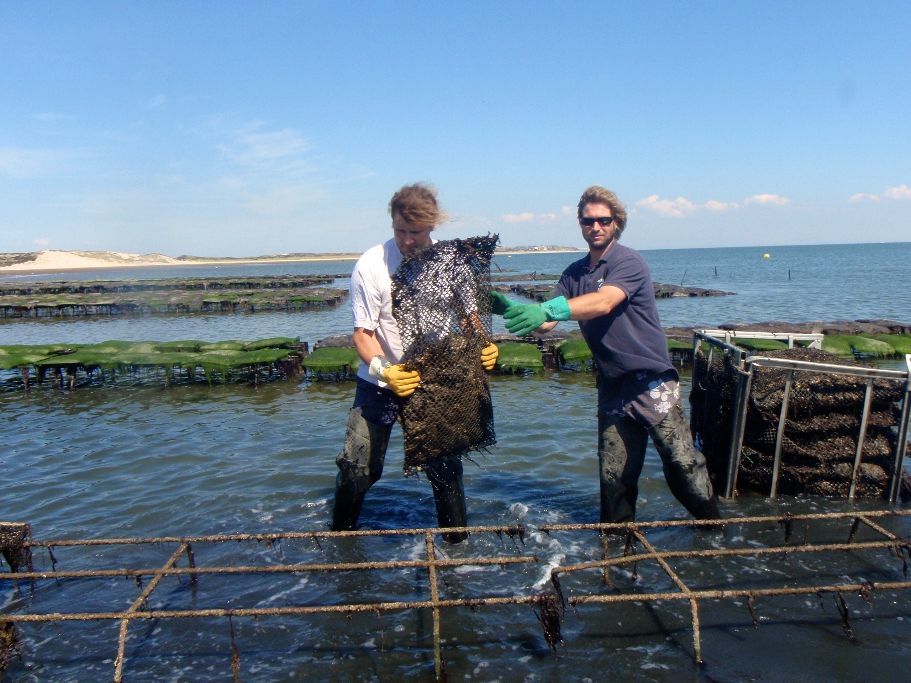 The working day for Christoffer and his two colleagues, Ulf and Caschi, is determined by the tide calendar. For 1:20pm today, the experts have predicted low water levels between List and Kampen. In rubber boots and thick blue sweaters, the three men leave the warehouse of "Dittmeyer's Austern-Compagnie" and drive by tractor to the Wattenmeer shoals.

The sun shines over the North Sea; the wind blows from the northeast and pushes individual clouds over the island. As predicted, the sea has already ebbed back a few hundred meters, rusty metal frames, standing in long rows behind each other, appear as the water recedes.

Christoffer stops the tractor. Now they have to work quickly. Only at low tide can the oyster fishermen reach the breeding banks for just a few hours and 300 meters from the beach. Since 1986, the "Sylter-Royal" oysters are bred on the island. Clemens Dittmeyer has revived mussel fishing after the noble shellfish were wiped out by overfishing about 100 years ago. The farm now sells around one million oysters each year. The water quality is rated "very good," which is why the oysters from the German North Sea island are in great demand all over the world.

Christoffer and his colleagues detach the first "poches" (mesh bags) from the frames and start to shake the nets, which weigh up to 20 kilograms. This is a strenuous but important work, since oysters like to stick together using their cement glands. The shells are separated from each other by moving back and forth. Each oyster has to be handled about 22 times before being sold. Shaking is not the only part of the job; the bags are emptied out again and again, and the mussels are inspected and sorted by size.

Already during the 11th century, the Danish king Knut the Great created the first oyster beds. Later the shellfish from Sylt were sold to rich Hamburg and Bremen merchants. After the extinction of the European oyster, the Pacific rock oyster was introduced at Sylt - as in many parts of Europe - and after two to three years it has reached its "consumption maturity."

The oysters thrive on Sylt, but they don't like minus temperatures. In winter the mussels freeze to death or are crushed by ice floes. In November, the oyster fishermen bring the millions of mussels to List for their winter home. The mussels are stored in large basins and stop growing during this time because their metabolism falls into a kind of hibernation at cool temperatures and they lack food.

Nevertheless,"Sylter Royals" can be sold all year round. In summer, when the crustaceans are sexually mature, their flesh is much fatter, during the winter the mussels lose weight. “Every species has its admirers," says Bine Pöhner, who runs the business and is often affectionately called "The Oyster Princess" by some of the visitors. Her "Sylter Royals" have a mild, slightly vegetable-like aroma, she explains, and opens a shell, slurps out the contents and chews slowly. "Most people eat the oyster all wrong," she says. "They swallow it way too fast. It only develops its full flavor when it is well chewed a few times."