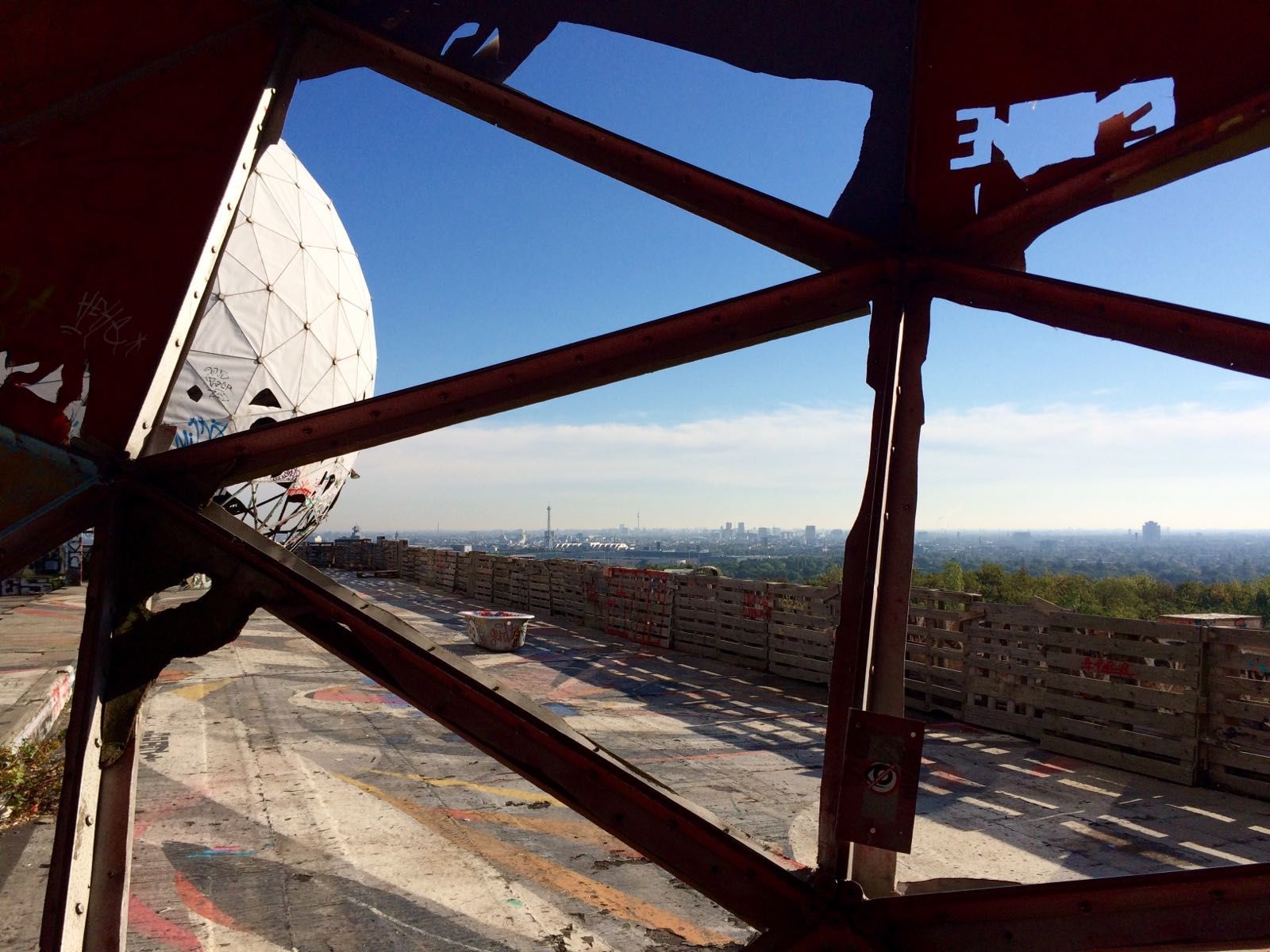 Berlin – on the top

The sky over Berlin has its own charm. In the old days, when the roofs had not yet been converted into luxury apartments, it was popular to slip through an open roof hatch with a bottle of wine and look for a pleasant spot with a view. Often you could run along whole blocks, meeting friends on the way. Not so long ago, really. Getting closer to the Berlin sky and leaving behind the city’s hustle and bustle below is still wonderful. We reveal where you can go to the top of the capital today.

The viewing platform in the steel rotunda at Checkpoint Charlie is only four meters above ground, but it gives the visitor a real change of perspective. It's a peek into another time. The artist Yadegar Asisi has created a 14 meter high and 60 meter wide XXL panorama of the Berlin Wall. The photorealistic image depicts a fictional snapshot of a rainy day in the autumn of 1980. The viewer looks from Kreuzberg over the border facilities and the “death strip” across to the east. While in West Berlin the punks are drinking beer and children cheerfully throw their ball against the wall, in the East Sector, the NVA border soldiers watch the hustle and bustle with grim faces.

Pssssst! During the Cold War, the Americans and British built a huge eavesdropping station on the 120-meter-high Teufelsberg in the Grunewald Forest. Between 1961 and 1992, the satellite dishes turned inside of four large domes that stood out white against the green of the treetops. They sent radio signals to spy on the enemy in the eastern zone. Entering the grounds was strictly prohibited. With the withdrawal of the Allies 24 years ago, the espionage technology was removed. The distinctive buildings are now deserted; the plastic tarpaulins are tattered and flutter in the wind, broken glass is everywhere and the walls and floors are sprayed with graffiti. More “Berlin feeling” than this you can’t find anywhere else!

The TV tower on the Alexanderplatz should not be missed. At 368 meters, it is the tallest structure in Germany and a Berlin landmark. Also - or perhaps especially - for locals and Berlin connoisseurs, the view from up here is fascinating. If you reserve a table in the restaurant ahead of time, you can avoid standing in line and can stroll past the long waiting queue for the elevator with a smile. The gastronomic offerings and service still present a certain East German charm. But the restaurant platform now turns on its axis in 30 minutes. After all, that's twice as fast as it did in socialist times.

A glass elevator takes visitors up the bell tower at the Berlin Olympic Stadium. It was built for the Olympic Games in 1936. From 77 meters up, police, important personages and reporters were able to follow the events on the Olympic grounds.

George Clooney, Madonna and Jude Law all like the casual club atmosphere at Soho House and have relaxed on the turquoise/white striped loungers by the rooftop pool or grabbed a drink in the 7th floor bar. Only members have access to the upper floors of this historic house, which was once home to the Central Committee of the SED party. An Italian restaurant has been opened next to a “Concept” store on the ground floor. Walk-ins are welcome in Cecconi's. You will dine in red leather seat groups and use real silver cutlery.

Today pilots are often disrespectfully called “bus drivers of the skies.” How royally they were treated in earlier times can still be experienced in the Pan Am Lounge on Budapester Strasse. In the 1960’s, the flight crew of the US airline was housed in the Eden Tower, opposite the main entrance to the zoo. In the evening, pilots and stewardesses met in the noble penthouse on the 10th floor where they threw glittering parties with a view of the Gedächtniskirche. Willy Brandt, at that time Berlin's mayor, was a frequent guest. When Pan Am went bankrupt after Germany’s reunification, the lounge languished as a Sleeping Beauty and was only kissed awake in 2006, as an event location.

At Potsdamer Platz, you will enjoy the superlatives. The fastest elevator in Europe takes visitors to the panoramic platform of the Kollhoff skyscraper at a height of 100 meters in just 20 seconds. From the top, you can see what once was the busiest intersection in Europe. Here also, was Germany’s largest rock concert (“The Wall”), and every spring, the Berlinale, the largest public film festival in the world, is held here.

Here, historical Berlin lies at your feet. From the rooftop you have a spectacular view of the Museum Island with the Berlin Cathedral, the Hedwig's Cathedral, the State Opera and as far as the Alexanderplatz. Elegant champagne cocktails are served while you sit on casual lounges surrounded by lavender beds that add a delicate scent in the summer.

Rather unimpressive and not far from the garage entrance of the Hotel Adlon, the entrance to the China Club hides. For members only (10,000 euros initial membership fee), the golden elevator door opens to take visitors to the exclusive club rooms. They are decorated with valuable antiques from China as well as modern Chinese art. From the roof terrace, you have an impressive view of the Holocaust Memorial. From up here, the 2711 concrete steles are reminiscent of a billowing wheat field, a symbol of the incredible number of Jews murdered during the Nazi period. To the north, guests are at eye level with the Quadriga on the Brandenburg Gate and can wink at the horses.