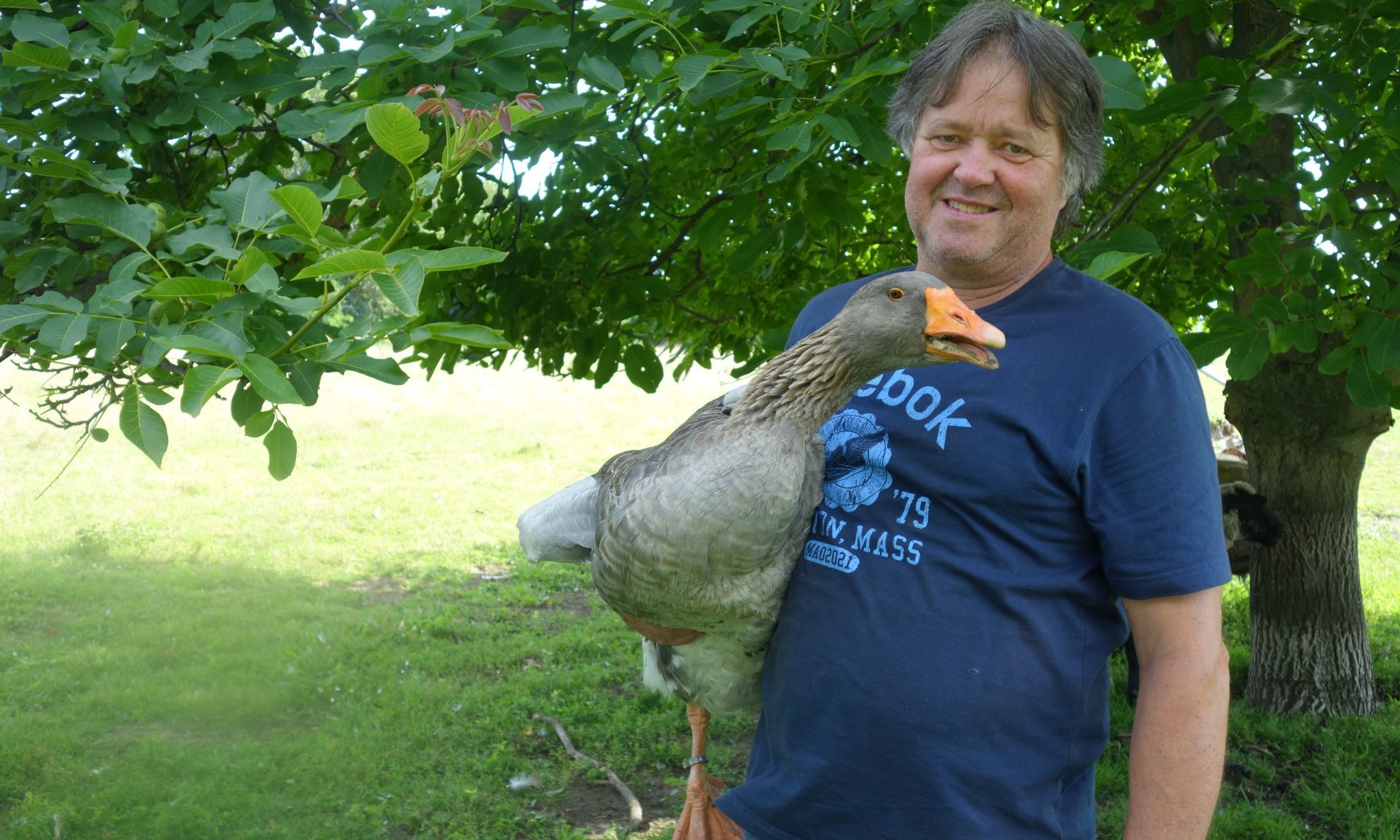 A visit to goose farmer Huettig

The welcome is not really friendly. Loudly blustering, the brown spotted gander waddles to the fence. He cranes his long neck and starts to hiss as we enter the yard. The chickens are startled and run around clucking. "It's all right, Paul, we all know that you're the boss here," says Frank Huettig, as he opens the gate and takes a firm step onto the meadow.

The angry bird really impresses us. His head reaches almost to our chest, his pink tongue trembles and he shows us a series of small pointed teeth that stand like a saw on the edge of his beak. After a minute, Paul finally calms down. He throws us a stern look and waddles with a swaying rump in the direction of the drinking trough. "Geese are the farm police," says Frank, pointing toward his house. The German shepherd, Bella, lazes in the sun. She checked us out on arrival, apparently saw no need for action and didn’t bother to get up.

The vigilance of geese is historical. Already in ancient Rome they are said to have warned the city before the invasion of the Celts in 387 BC, and were praised by the historian Livy. We Germans are also great goose lovers. However, we are fonder of them in a culinary sense. Around 10 million geese are eaten here just between St. Martin’s Day and Christmas. And top chefs know: only happy fowl taste good.

Just like farmer Huettig's geese in Linum, where 24 Pomeranian geese currently live an hour's drive from the capital, Berlin. Everything they do, they do together. Right now, they are standing under the old walnut tree and plucking the tips off the grass. Paul is trying to get close to Liese. Liese is actually his wife, but because Paul was ill in the past five weeks and had to stay in the barn, Liese has had a flirt with Gustav. And as long as Paul is not yet back to his original top form, Gustav hopes that he and Liese could get a serious thing going. "Paul will definitely get his act together, and in the end he will win back his Liese," says Frank. "Because geese often live in stable partnerships that sometimes even last a lifetime." A lifetime - that can be up to 30 years for geese. In the spring, goose and gander raise their goslings together. While she incubates the nest of two to 15 eggs, he guards the nest; and when the family goes swimming in the lake, Mama Goose swims ahead, with the goslings following her and Papa as the rear guard, making sure that no one gets lost.

"I think Liese is mad at Paul. She has repeatedly looked at him through the open barn door, thinking that he had lost interest because he did not join her. She just did not understand that he was locked up and pining for her the whole time,” explains Frank. A love drama on the farm! As if he understands his owner and wants to agree with him, Paul straightens up and stretches his wings. "Anyone who observes the animals for a while gets the impression that they have almost human feelings," says the 61-year-old. "If a member of the family dies or a gaggle is destroyed, then the geese mourn. For days, their usual cheerful chatter is only half as loud."

Even more pronounced is the social behavior of the wild gray geese that fly in large groups across Germany every autumn. They are the prototype of our goose, which was domesticated by humans around 3000 years ago. Unlike Liese, who quickly became unfaithful to her Paul, and - not to be overlooked at this point - Paul, who in addition to Liese, still loves Auguste and also had something with Thea, most wild geese refuse to mate again after losing their partner. During their migration, often thousands of kilometers, to their winter quarters, the wild birds fly in the characteristic V-formation. They rotate from front to back and cheer on the goose that is currently flying at the point with encouraging honks. The ingenious wind cutting technology helps the birds to fly up to 70 percent further in the group than any one goose could alone. And if a goose is injured or shot by hunters during the long journey, some of the geese will stay behind to care for their injured friend.

The gaggle makes the geese strong; the fox also knows how strong. "He only has a chance at night when a bird accidentally gets left out of the barn, is completely alone outside and disoriented in the dark," says Frank. During the day, the robber doesn’t show his face, too dangerous, Frank could be around. The geese stick together, beat with their powerful wings and hack with their beaks on him so long until he flees. If he does not give up, he risks fractures.

It is now evening; the sun bathes the meadow in a golden light. The geese gaggle is grazing at the other end of the pasture. Paul and Gustav are close behind Liese. The goose feeds on clover with relish and ignores her two suitors. No question: she is the boss here!